Irish Crochet lace differed from the continental forms in the way it was designed.  Crochet is based around the concept of the simple chain stitch but Irish Crochet lace makers developed their own variations of this stitch, designing intricate lace motifs such as the Irish Crochet Rose Square motif in the photograph.  Patterns were then designed on paper for the layout of these crochet motifs.  The completed crochet motifs were then pinned into place and joined with a variety of filling stiches. Sometimes smaller motifs were joined together in strips to make lace trim which was then sold by the yard.  Irish lace was normally white or cream in colour.

While Irish Crochet lace is thought to have been made in the Ursuline Convent in Blackrock, Cork before 1846, it was the need to alleviate poverty after the Great Famines of 1845 to 1847 that propelled Irish Crochet lace from a craft form to an industrial art.  The Ursuline Sisters originally came from France where lace making was well established in the convents.  Lessons were started on a formal basis in the convent in Cork prior to 1846 but after 1846 there was a large emphasis on the teaching of lace making with a view to creating an income for the students.  Soon other lace schools were set up in other convents, such as Youghal, Killarney and Kenmare.  Drawing was also taught as good designs were considered essential to display the fine workmanship. 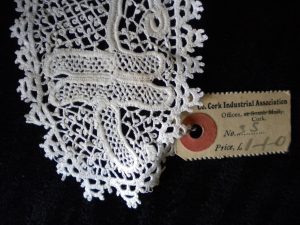 The advantage of crochet work was that it could be made easily in a domestic setting. This made it suitable work for handing out as piece work in the form of small motifs such as the Irish crochet flowers and leaves and shamrocks. Also Irish crochet lace edgings, insertions and trim work suited as piece work for the women and girls, who mostly only worked in their homes. The wages earned made an important contribution to family income.

Like all the Irish handmade laces, in the 1880’s Irish Crochet lace benefitted from training provided by the Crawford Municipal School of Art in Cork.  Lace making and lace design courses were introduced  into the lace schools and design advice was given by Alan Cole of the Department of Science and Art, Kensington. The Congested District Board also promoted lacemaking in rural areas all around the West of Ireland, again to provide employment and relieve poverty. Variations in patterns, stitches and designs developed, one example being Clones Lace. 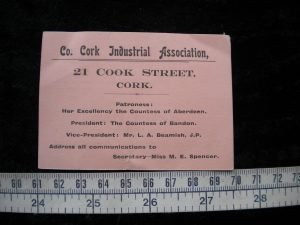 I hope you enjoyed this small snippet from the past.