Many people may be familiar with the names of the Laces of Ireland but wonder how they differ. Traditional Irish Lace can be grouped into three main types of lace making; crochet lace, needlepoint lace and mixed lace. 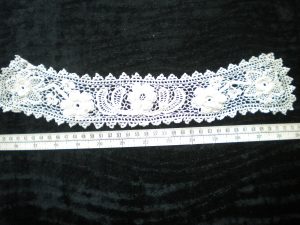 Traditional Irish crochet lace makers used a very fine thread and a very fine crochet hook. First, a pattern was drawn for the item to be made.  An Irish crochet pattern could contain many different flower motifs such as rose motifs or sunflower motifs, which would be combined with a variety of leaf motifs. Individual motifs were pinned to the paper pattern and then joined up with ground stitches. A few different kinds of ground stitches were used, depending on the complexity required by the pattern. Sometimes a packing cord was introduced to give height and emphasis to parts of the motifs. Finally there was usually a crochet lace trim attached to the outside edges of the piece of work.

Needlepoint lace is where the lace is made by hand using a needle and thread and a variety of loops and stitches. The most famous of the Irish needlepoint laces are Kenmare Lace and Youghal Lace, both of which are called after the towns of Kenmare and Youghal. The Presentation Convent in Youghal was where these forms of needlepoint were first designed and taught. From Youghal, it spread to convents in Kenmare, Killarney and New Ross who all developed their own variations of the lace. Youghal Lace was revived by a lady from Cork, Veronica Stuart, in the late 1980’s, though not on a commercial basis. Kenmare Lace is still to be found in the Kenmare Lace and Design Centre in Kenmare town. 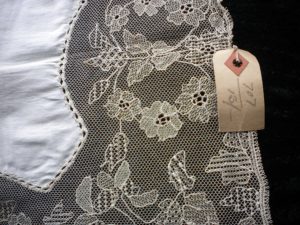 A mixed lace refers to needle work such as embroidery, cutwork and applique being done on a machine made lace, usually a net lace.  The two most well known mixed laces of Ireland are Limerick Lace and Carrickmacross Lace.

Limerick Lace is where a design was made on a machine made net lace, using either a special hooked tambour needle or an ordinary sewing needle or both. The combination of the two methods of tambour work and run work using a sewing needle was a signature of Limerick Lace. 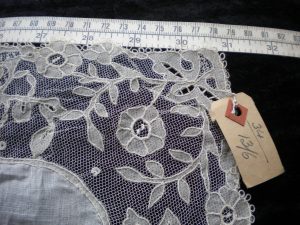 Carrickmacross Lace also used a foundation of this machine made net lace, but differs in that it consists of a fine cambric appliqued on to the net along with point stitches in between the applique. Limerick Lace no longer appears to be available except from sellers of antique laces but small pieces of Carrickmacross Lace can still be bought from some local small suppliers.

There were other laces which evolved in other parts of Ireland but these three types were of the longest duration.